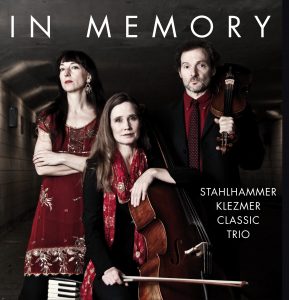 The Stahlhammer Klezmer Band, consisting of Semmy′s grandfather and uncles, was founded 1920 in the Lublin area in Poland. The orchestra gave concerts and played at parties until 1939. In the old picture the musicians are seen with mandolins, guitars and balalaikas, but they also played violin, cello, bass, harmonica, trumpet and drums. The ensemble played traditional Jewish Eastern European party music, what we today call klezmer, but they also played music that was popular at the time and whatever they liked. They also kept a dance school.World War II put an end to the ensemble. Semmy has written a book about his family’s destiny, Codename Barber, that describes the time before, during and after the war. Semmy Stahlhammer continues the family tradition with Stahlhammer Klezmer. The trio has given concerts since 2009 at several festivals, Chamber music associations, churches, synagogues and circus tents. Tours in the USA, Canada and Macedonia. The Trio received grants from the Ingmar Bergman Foundation and has played for the Swedish Radio & TV.

SEMMY STAHLHAMMER has been First Concertmaster at the Royal Swedish Opera, teacher at the Stockholm Royal Music College, appears on CD recordings and has been artistic director of several music festivals. In his atelier in Stockholm he restores violins. His book Codename Barber, which has received outstanding reviews, first published in Swedish, is translated into English, Russian, Hebrew and Chinese. He frequently appears at the Royal Castles in Sweden on events arranged by the Royal Family.

MIRIAM OLDENBURG, accordion, is a frequently engaged musician, mostly in the genres of klezmer, world music and cabaret. She has appeared on Swedish television and radio and participated in many theater productions. Miriam is a member of Lindy & Bon Bon Band, world music group Parizad and Cabaret duo Glädjeflickorna. She has also toured Europe with Cirque du Soleil’s Corteo.

ISABEL BLOMMÉ is a free lance cellist. She has worked at the Royal Swedish Opera, the Swedish Radio Symphony Orchestra and the New Zealand Symphony Orchestra. She has been Artist in Residence at the Banff Music Center, performs at international music festivals, on radio and TV and appears on CD recordings. Isabel is a member of Ensemble Fenix, World Music group Parizad and Indra String Quartet.

NINA ÅKERBLOM NIELSEN (guest singer) is a genre-crossing singer, composer and lyric writer. She performs baroque and renaissance songs, Celtic and Swedish folk music, Yiddish songs, romantic arias, jazz, musical hits, contemporary art music, and writes music for choir and theatre. She has received the Katz Culture Grant for her archievments for the Jewish music. She has toured internationally with Ensemble Villancico, Le Tendre Amour from Barcelona, and nationally with various Swedish groups.