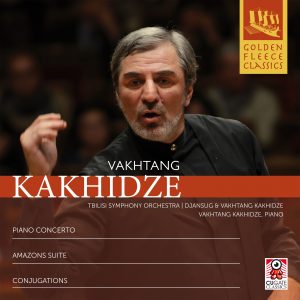 This album gives a perfect insight into a versatile musical father-son relationship. Djansug Kakhidze, the nestor of the Georgian classical music scene is assisting his son Vakhtang, who long since is an autonomous musician in his own right: creative as a composer, masterly as a pianist and eventually a relentless perfectionist as a conductor. There are three talents in one – which are imperatively to be discovered.

Vakhtang Kakhidze wrote his Concerto for Piano and Orchestra in 1980. It was in the fourth year of his studies at the Moscow Conservatory and the piece immediately had prompted the jury of the USSR Young Composer’s   Competition to award the first price to the composition. The piece follows the classical three-movement form but will be played nonstop. Its fundamental building material is the C major scale, which constitutes the dramaturgy of the composition by changing consistently its modality, facture, rhythm and style.             Percussive elements are alternating with high and low speed scales, seemingly free improvisatory parts are absorbed by formal structures – everything is nonstop under way, fully on purpose crossing borders between Classical Music and Jazz elements.

Amazons was composed during 1988/89, when he returned home from Moscow to Tbilisi. The libretto is based upon a movie script of the same name, written by the famous Georgian poet Titsian Tabidze. The premiere took place in September 1989 on the stage of the Tbilisi Opera & Ballet Theatre.

Many well-known representatives of the Georgian cultural scene created this performance, such as the Librettist and Stage-Director Guram Meliva, the Choreographer George Aleksidze and the Stage-Designer  Nikolas Ignatov. Last but not least it was Vakhtang’s father Djansug Kakhidze, who conducted the acclaimed premiere of the complete ballet. In 1998 Vakhtang Kakhidze extracted 13 pieces from the complete ballet and compiled the Symphonic Suite in the present form. And this version shows the whole range of the composer’s talent: coherent depiction of the different characters by expressive musical means, tension-filled development of the musical material over and above the opposing movements, elaborating motifs and themes by assigning them to all orchestral sections which eventually is rounded by a colourful orchestration thus allowing a large late romantic symphony orchestra almost unlimited opportunities.

Another early proof of Vakhtang Kakhidze’s skills as a composer is    Conjugations for Symphony Orchestra. It was his graduation piece at the Moscow Conservatory and it is an attempt to combine and, at the same time, to oppose different musical instruments and sections of the orchestra.

The piece explores the borders of tonality, yet remains tonal. It contrasts clusters in the brass section with seemingly simple melodies, it arranges polyrhythmic structures put in layers one upon the other, separating and      combining them, playing with this discrepancy. At the same time the composer adds typical Georgian musical ingredients such as figural ostinato phrases and extended organ points. Just like in linguistics the musical material in Conjugations is elaborated in all its facets.