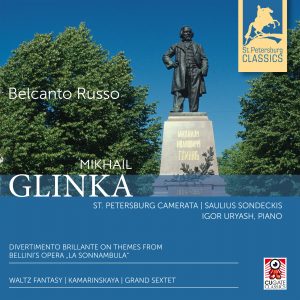 This album presents four magnificent orchestral works by Mikahil Glinka, allowing an insight into his workshop at an early stage of his creative development. It reflects the encounter of Russian music tradition by form and genre – songs and dances – with the Italian art of singing – the belcanto – which Glinka became acquainted with during his years of travel. As of 1830 he spent three years in Italy to enhance his knowledge of the Italian opera. In this time he met in Milan Vincenzo Bellini and Gaetano Donizetti, getting familiar with the art of belcanto, which he later combined with the Russian vocal tradition thus creating the personal Glinka style.

Although Glinka’s great importance lies in the field of opera and singing he bequeathed a number a enchanting symphonic works, which cannot deny their vocal and theatrical heritage. His Waltz Fantasy in B minor is one these beautiful miniatures. Originally written for piano the musical design is quite dramatic right from the beginning, so it comes as no surprise that Glinka revised it twice: the first new version was arranged for small orchestra, enhancing already the dramatic outline followed by a second one for large orchestra in the year before his death in 1856. This highly elaborated one is on our album and shows the special importance the piece must have had for the composer.

Glinka’s Kamarinskaya, which originally is the name of a Russian folk dance, was composed in 1848 and it is the first orchestral composition based on Russian folk songs. Two themes give the coordinates to the piece: the first one is a bridal song with a slow tune, the second one, name giver  „Kamarinskaya“ is a nagriish, a fast and furious dance tune. Glinka here refers to the roots of folk song and the principal of modified repetition, varying the musical ambience by changing orchestral colours, harmonies and contrapuntal arrangements.

On March 6th 1831 Glinka witnessed the premiere of Bellini’s La Sonnambula in Milan and was immediately intrigued by the expressive and artful vocal lines, which constitutive the art of belcanto. And it was the famous Italian publisher Ricordi who encouraged Glinka to compose the Divertimento brillante on themes from Bellini’s Opera La Sonnambula. He chose three major parts from the opera. The vocal parts were constantly assigned to the piano while the strings are taking over the orchestral and the choir parts. The Divertimento ends with a brilliant stretta, which is pure Glinka but written in the style of Bellini.

The Grand Sextet is also a result of Glinka’s Italian journey. The musical flavour is belcanto-like, the design of the melodies and the formal structure reveal at any time the influence of the Italian opera.

The present release comes from the 24 bit/96 khz state-of-the-at recordings out of the CuGate Classics archive. They are carefully remastered by the prestigious Grammy award-winning b-sharp studio Berlin using the original source material.

Born on 11 October 1928 in Šiauliai (Lithuania) he studied violin at the Lithuanian Academy of Music and Theatre with Professor Alexandras Livontas. As this teacher was a student of David Oistrakh, Sondeckis himself might be called a „musical grandson“ of the famous Russian violinist. After his graduation and stages as teacher at the Juozas-Tallat-Kelpša Conservatory and the National Mikalojus-Konstantinas-Čiurlionis School of Arts in Vilnius he successfully completed his studies at the Moscow Conservatory. In 1960 he founded the Lithuanian Chamber Orchestra and worked there as artistic director and principal conductor until 2004. From 1963, he continued his education, studying conducting with Igor Markevich at the Moscow Conservatory. In 1977 he became professor at the Vilnius Conservatory. As of 1989 he was conducting the St. Petersburg State Hermitage (Camerata) and from 2005 the Kremerata Baltica Chamber Orchestra. Sondeckis was a member of the Herbert von Karajan Foundation in Berlin and was a coveted juror at many major international competitions, including Mozart in Salzburg, Tchaikovsky in Moscow and Toscanini in Parma. A honorary member of the Lithuanian Musicians‘ Union he is one of the most decorated characters in contemporary classical music in Lithuania, including People‘s Artist of the USSR (1980), Laureate of the USSR State Award (1987) and winner of the Lithuania National Award (1999). He died on 3 February 2016 in Vilnius where he is buried in the Antalkalnis Cemetery.

Igor Uryash attended the St. Petersburg  Academy of Music, where one of his teachers was Anatol Ugorski. In 1991, he won the first prize at the Gian Battista Viotti International Music Competition in Vercelli, Italy. Igor Uryash performs as a soloist as well as an accompanist but also in chamber orchestras and with renowned symphony orchestras throughout the world. Among others he has worked with world famous musicians such as the conductors Valery Gergiev, Alexander Dmitriev, Saulius Sondeckis, the violinists Maxim Vengerov and Viktor Tretiakov and the cellists Mstislav Rostropovich and Boris Pergamenschikov. Besides his active performing schedule Igor Uryash is working as a teacher at the St. Petersburg Academy of Music.