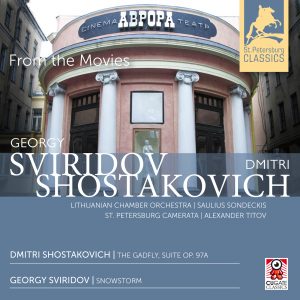 This album is dedicated to two masterpieces of Russian film music. It is also a reminiscence to Saulius Sondeckis, one of the figureheads of the former Soviet Union chamber music scene, who died last year, and to Georgy Sviridov, whose 20th anniversary of death is around the corner next year.

The Gadfly Suite. Since his studenthood at the Leningrad Conservatory Dmitri Shostakovich had developed a strong connection to cinema. In the twenties of the last century he earned his living as a pianist at silent movie theatres, and the influence of this new media, which became highly important in the young Soviet Union, went along with the composer for a lifetime testified by an output of nearly 40 film scores.

In 1955 Alexander Fainzimmer made a film based on the novel „The Gadfly“ by the English authoress Ethel Lilian Voynich, which was extremely popular and a bestseller in the Soviet Union. It was about the tragic story of a young freedom fighter in 19th-century Italy nicknamed „Gadfly“, who, as an illegitimate son of a cardinal ultimately turned into a rebelling dandy, who was finally executed by a firing squad. Shostakovich was intrigued by the plot and the environment where it took place, since this allowed him to play with Mediterranean musical patterns. Shostakovich’s associate and friend Levon Atovmian condensed the complete score down to a suite, consisting of twelve movements, which were used for this recording. The single titles already give an idea of what the music is about – pure entertainment, characterising the moving pictures by means of the music. A contredanse recalling the 18th century, an Italian tarantella type characterising a funfair, unusual classical instruments such as saxophone and hurdy-gurdy reminiscences during a humorous waltz, a romance, which recalls the famous „Méditation“ from Saint-Saëns „Thaïs“ (easygoing enough to become later the main theme of the British TV series „Reilly, Ace of Spies“) – this is musical mainstream at the highest level making the listening of this colourful and diverse suite a genuine pleasure.

Snowstorm. Georgy Sviridov’s roots in Russian folk music made his connection to Alexander Pushkin nearly inevitable. So when in 1964 the film director Vladimir Basov planned a filmization of Pushkin’s Snowstorm, he approached Sviridov, who agreed by return. His musical depiction of the film, based on a short story from Pushkin’s Tales of the Late Ivan Petrovich Belkin, proves his talent and creativeness in folkloristic musical composition, using at the same time romantic stylistic elements, including the large romantic symphony orchestra. The richness of his musical language inspired by the poetic strength of Pushkin’s writing creates a scent of Hollywood flavour, which might not be a coincidence. The last scene from Snowstorm „Winter Road“ was allegedly plagiarized and used as the main theme for the popular video game series „Metal Gear Solid“.

The present release comes from the 24 bit /96 khz state-of-the-at recordings out of the CuGate Classics archive. They are carefully remastered by the prestigious Grammy award-winning b-sharp studio Berlin using the original source material.

Saulius Sondeckis was one of the most versatile musicians of the former Soviet Union. As an educated violinist, conductor, orchestra leader and teacher he shaped generations of musicians, both instrumentalists and vocalists. Born on 11 October 1928 in Šiauliai (Lithuania) he studied violin at the Lithuanian Academy of Music and Theatre with Professor Alexandras Livontas. As this teacher was a student of David Oistrakh, Sondeckis himself might be called a „musical grandson“ of the famous Russian violinist. After his graduation and stages as teacher at the Juozas-Tallat-Kelpša Conservatory and the National Mikalojus- Konstantinas-Ciurlionis School of Arts in Vilnius he successfully completed his studies at the Moscow Conservatory. In 1960 he founded the Lithuanian Chamber Orchestra and worked there as artistic director and principal conductor until 2004. From 1963, he continued his education, studying conducting with Igor Markevich at the Moscow Conservatory. Starting 1977 he became professor at the Vilnius Conservatory. As of 1989 he was conducting the St. Petersburg State Hermitage (Camerata) and from 2005 the Kremerata Baltica Chamber Orchestra. Sondeckis was a member of the Herbert von Karajan Foundation in Berlin and was a coveted juror at many major international competitions, including Mozart in Salzburg, Tchaikovsky in Moscow and Toscanini in Parma. A honorary member of the Lithuanian Musicians‘ Union he is one of the most decorated characters in contemporary classical music in Lithuania, including People‘s Artist of the USSR (1980), a Laureate of the USSR State Award (1987) and winner of the Lithuania National Award (1999). He died on 3 February 2016 in Vilnius where he is buried in the Antalkalnis Cemetery.

Aleksander Titov was born in 1954. He received his musical education at the Leningrad conservatory as a pianist, choir director and opera-symphony director from such famed professors as Avenir Mikhailov and Ilya Musin. His concert activities at the best Leningrad halls began in the mid 1970s. Titov participated in international projects as an assistant to Mstislav Rostropovich and Gennady Rozhdestvensky. Music from all epochs are in his repertoire, from Monteverdi to compositions of today. He is especially famous as a knowledgeable interpreter of 20th century music, as well as of many rarely performed and forgotten compositions. In terms of his creative assets – aside from the symphonies – are many cantata-oratory works. He brought into existence and premiered such opuses as the „Cantata on the 20th October by Prokofiev“ (on CGC006-2 Back in the USSR) and the cantata „The History of Doctor Johann Faust“ by Schnittke. Titov actively tours abroad, and has especially durable creative contacts with the BBC orchestra. He teaches at the St. Petersburg Conservatory and has been a guest conductor at the Mariinsky Theatre. His theatrical repertoire includes Russian opera classics such as Glinka’s Ruslan and Lyudmila, Shostakovich’s Katerina Izmailova, Prokofiev’s four operas (The Gambler, Love for Three Oranges, Semyon Kotko, War and Peace), and almost all traditional ballet classics. classicclassics .(including Tchaikovsky’s), all ballets from Stravinsky’s Russian period