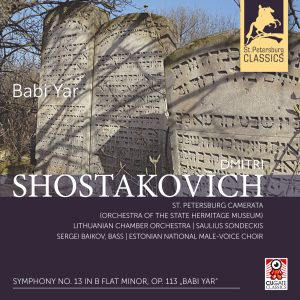 In 1961 the then twenty-nine-year-old Yevgeny Yevtushenko published a poem entitled Babi Yar in the Literaturnaya gazeta. Babi Yar was the name of a ravine on the outskirts of Kiev which in 1941 had been the scene of a mass execution where, within the space of thirty-six hours, some 34.000 Jewish men, women and children were shot by a special unit of the German SS. In his poem Yevtushenko used the National Socialists‘ act of genocide as the starting-point of an attack on anti-Semitism in general, which he pilloried as a timeless evil that was widespread throughout the world, but which, he implied, was especially rife in Russia. Few Russian composers of the past were above reproach as far as anti-Semitism was concerned. Of these, the two that spring most immediately to mind are Rimsky-Korsakov and Shostakovich. Shostakovich had already revealed his philo-Semitic sympathies in his song-cycle From Jewish Folk Poetry, written during the final years of Stalinism (when anti- Semitism was even officially condoned) but forced to wait until 1955 for its first performance, which finally took place only against a background of considerable resistance. It was enough for the composer to read Yevtushenko‘s Babi Yar for him to decide to set it to music. Initially he thought in terms of a single movement, but after completing it in this form he resolved to add four further movements, all of them settings of other poems by Yevtushenko: Humour, In the Store, Fears (written specifically for the occasion) and Career. The score was completed on 20 July 1962, but it took a long tune to establish itself in the concert hall. The first performance took place in in Moscow in December 1962. Due to political pressure Yevtushenko had to revise Babi Yar and Fears, which Shostakovich accepted only reluctantly. This recording however restores the original version of Yevtushenko’s words.
The present release comes from the 24 bit /96 khz state of-the-art recordings out of the St. Petersburg Classics archive. They are carefully remastered by the prestigious Grammy award-winning b-sharp studio Berlin using the original source material.
Liner notes in English. Design using spectacular views of St. Petersburg sites.

Saulius Sondeckis was a graduate of the Musical College in Vilnius, where he studied violin. As his teacher was a student of David Oistrakh, Sondeckis himself might be called a „musical grandson“ of the famous Russian violinist. From 1963, he continued his education, studying conducting at the Moscow Conservatory. Sondeckis has appeared as guest conductor with many distinguished European orchestras and sits on the juries of many major international competitions. The St. Petersburg Camerata was founded in 1989 in Leningrad by Saulius Sondeckis and is consisting for the most part of graduates of the local Conservatory. Most of the Camerata‘s musicians are active soloists in addition to their orchestral work. Many have won prizes in international competitions, and have extensive engagements. Thanks to his eminent mastery and forceful personality, Saulius Sondeckis has succeeded in achieving a finely balanced sound with the ensemble, leading to numerous international successes. In 1990, only a year after its founding, the ensemble was celebrated as the best youth orchestra at the music festival in Murcia, Spain. In the same year, the musicians completed a very successful American tour. Further invitations followed, including one to the Frankfurt Festival. In February 1994, the ensemble was named the official orchestra of the Hermitage in St. Petersburg. The Lithuanian Chamber Orchestra is another ensemble whose history is synonymous with the name Saulius Sondeckis, its founder and leader. Sondeckis and his players can now look back on a long-lasting cooperation in a common artistic cause – a partnership that helps to explain the homogeneity of tone and unanimity of musical expression that have made the Lithuanian Chamber Orchestra one of Europe‘s most sought-after ensembles.