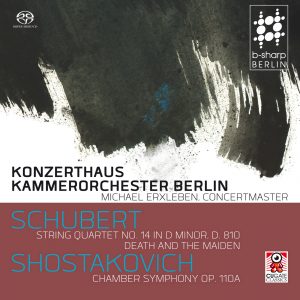 „A quartet for string orchestra! This will sound strange to you. I already know all objections that will be raised: the destruction of intimacy, of individuality. But this would be mistaken. What I intend is nothing but an ideal representation of the quartet.“ (Gustav Mahler, 1899) The perceived contradictions appear at first to be barely reconcilable. On one side is the string quartet, regarded unarguably as the noblest and most demanding musical genre since the time of the First Viennese School. On the other side are those works for string orchestra from the 19th century, which are associated with a rich, more aesthetically pleasing, even lyrically melancholy tone – for example, the widely popular serenades for strings by Antonín Dvorak, Peter Tchaikovsky, Edvard Grieg, Robert Volkmann and Edward Elgar. As a result, the boundaries between string quartet and string orchestra seem to be strictly drawn – if the occasional misunderstanding of performance practice and particular aspects, or simply a delightful new idea, had not led again and again to new sonic explorations. Being so, the arrangement of Franz Schubert’s String Quartet in D minor, D. 810 begun by Gustav Mahler in 1894 does not appear so absurd at all. His intention had been, to overcome the historical dilemma of the string quartet, namely, how to introduce this highlydifferentiated, intimate genre into the large concert hall. In Mahler’s own words: „In the large room, the four voices get lost; they do not speak to the listeners with the power the composer intended. I give them this power by reinforcing the voices. I release the expansion which lies dormant in the voices, and make the sounds sing.” Unlike Schubert and Beethoven who had to put up with sundry arrangements of their published works, Shostakovich was himself able to authorize the 1960 „symphonic“ version of his String Quartet No. 8, Op. 110 by Rudolf Barshai – and even encouraged the musician and conductor of the Borodin Quartet to arrange other works by him.

CUGATE Classics proudly welcomes b-sharp, a fresh Berlin based label for classical music. It is a premium branch of the correspondent music production-company and recording studio, which has already made a name for itself with internationally acclaimed recordings of superior artistic and technical quality. Recent awards include 2 Grammys, 6 Echo-Classic awards, multiple Gold and Platinum awards and even two entries into the Guinness Book of World Records. All b-sharp projects are produced as hybrid-SACD in Stereo and Surround-Sound and will be released as a discrete production-line by CUGATE Classics.