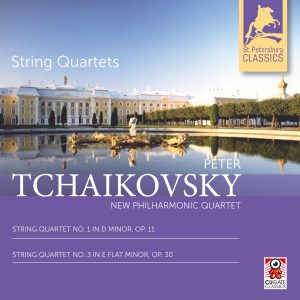 Tchaikovsky’s three quartets were written during one fiveyear period, a time of rapid growth and maturing of his talent and creativity. Just as he pointed in one of his newspaper reviews to the love and attention which Haydn, Mozart and Beethoven had lavished on this “modest form of music, which, in the narrow confines of four bowed instruments, provides for the richest development of musical ideas,” Tchaikovsky’s own approach to chamber music was similarly serious and profound. His quartets combine the exquisite, refined sonorities of an ensemble with truly symphonic development and an amazingly warm and accessible musical language. Tchaikovsky’s Quartet No. 1 in D major, op. 11, like his First Symphony, is often compared to the lyrical diary of an artist, in which impressions and feelings are expressed in contrasting juxtapositions of musical images. The mood of the first movement (Moderato e semplice) is one of remarkable integrity and serves as a preparation for the second movement, the famous Andante cantabile, which most completely expresses the fundamental mood of the whole work – bright, cloudless, youthful joie de vivre. Tchaikovsky wrote his Quartet No.3 in E flat minor, op. 30 closely related to Beethoven’s symphonies in its treatment of the idea of irresistible fate and the problem of life and death which would trouble the composer for all of his creative life. The third is the most dramatic of Tchaikovsky’s quartets, however, he does not want the end to be tragic. Having driven the “action” to its tragic summit, he switches it into a different field for the finale where death’s gloom is overcome by a call to action and the hale breath of life. The present releases come from the 24 bit/96 khz state-of-the-art recordings out of the St. Petersburg Classics archive. They are carefully remastered by the prestigious Grammy award-winning b-sharp studio Berlin using the original source material. Liner notes in English. Design using spectacular views of St. Petersburg sites.