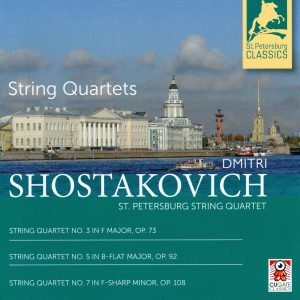 The three quartets on this album provide insight into the conflict Russian composers had with the doctrine of Socialist Realism. They display how a crisis due to political circumstances can achieve – per aspera ad astrum – new art forms on high levels. Shostakovich had always regarded himself as a socialist composer. He had delivered so far what was expected from a political artist by the regime: to write easily accessible operas with crowd scenes and huge choirs, preferably on revolutionary subjects, eventually with happy endings and of course instrumental pieces which should convey the spirit of socialism. And suddenly he fell from grace, over night and adamantly. The regime had recognized violations against the doctrine of Soviet aesthetics in his Opera Lady Macbeth of the Mtsensk District and banned it from stage. Until then the opera was hailed after its premiere in 1934 as the first great masterpiece of Socialist Realism. In this light one has to look at his string quartets. The whole cyle was composed after the Lady Macbeth and from there one can recognize a central watershed in Shostakovich’s compositions. They became a private affair from the beginning. Shostakovich had recognized the controllers’ ears of the artistic day-to-day-business were highly focussed on great public works such as operas and symphonies reflecting contemporary issues, free from Formalism, whereas neglecting at the same time the introspective, intimate approach of the chamber music genre. This prevailing intimate mood is shaping the entire cycle of Shostakovich’s 15 quartets revealing a deep insight into his sensitivities. And also they provide a substantial share to the genre. It became a field for experiments: Quartet No. 3 is breaking with its five movements the classical four-movement scheme but using at the same time traditional elements as the sonata form, fugue and passacaglia. No. 5 connects all the movements to one major piece of music, and No. 7 with its oscillating motif in the beginning of the second movement is already heralding the minimalist music that came up about twenty years later in the USA with composers such as Steve Reich, Terry Riley and Philip Glass. The present releases come from the 24 bit /96 khz stateof- the-art recordings out of the St. Petersburg Classics archive. They are carefully remastered by the prestigious Grammy award-winning b-sharp studio Berlin using the original source material.