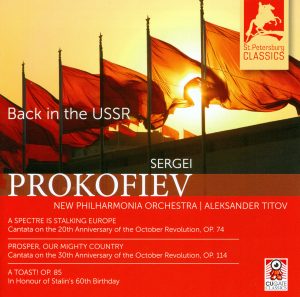 The three works on this album belong to a large group of masterpieces, which dispels the myth that Prokofiev – ‘shaker of foundations’ and ‘daring innovator’ – became, after his return to the USSR, an ‘acquiescent traditionalist’. But what message was the composer trying to convey? The texts Prokofiev set to music were „Party lyrics“ and in order to understand the reason behind, one must turn to the intriguing puzzle that is Prokofiev’s relationship with Soviet Russia. As a result of the Soviet government’s permit to tour abroad, he lived for more than 18 years outside the country. On his return to his homeland, he entered actively into the building of socialist musical culture. However, he also recognized soon the reverse of the medal: the socialist realism with its official preference for simple ‘folk’ melodies, composed in a mood of profound optimism and easily understood by the masses led to conflicts with progressive composers. Dmitri Shostakovich is another prominent example. They all were exposed to persecution in the press, deprived of work and doomed to poverty. Thus Prokofiev was forced to play by the rules of the game. Nevertheless, in his work there remained too much that conflicted with the ideals of the ‘construction of communism’. If one compares the music with the lyrics, it is easily recognizable that Prokofiev treated the ‘sacred’ revolution musically with his own accurate and almost indiscernible irony. His three best Soviet cantatas can be heard here in the form originally intended by their author. After the debunking of the Stalin ‘cult of personality’ in 1956, the ‘Stalinist’ parts of the cantatas were cut and new verses added. Our recordings reverse these changes. Only in the cantata „Prosper, Our Mighty Country“ is the later text retained as a kind of unique memorial to the cultural and political ‘thaw’ that was all too quickly to turn into thirty years of stagnation. This disc is in a way a musical history of modern Russia: the October Revolution as seen through Prokofiev’s eyes, the dictatorship of Stalin, and the period of thaw and stagnation. The fact that such a recording could be made in Russia today was a testament to the dawning of a new era – an era of sober and honest reflection on history and of the search for a new way. The present releases come from the 24 bit /96 khz state-of-the-art recordings out of the St. Petersburg Classics archive. They are carefully remastered by the prestigious Grammy award-winning b-sharp studio Berlin using the original source material.